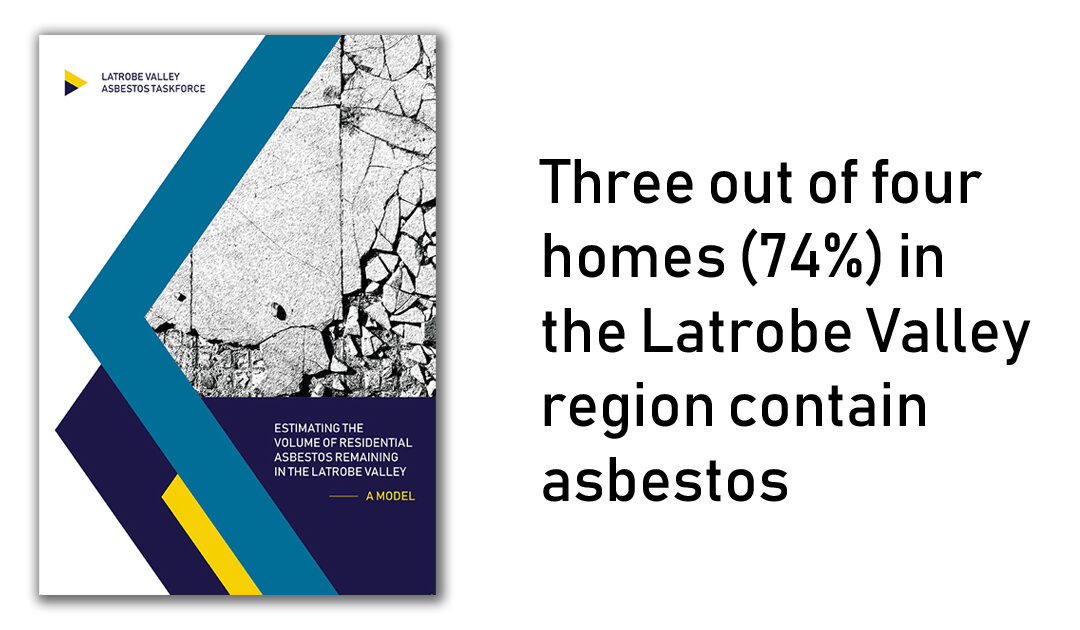 It has been found that almost three in four (74%) homes in the Latrobe Valley region are likely to contain asbestos – significantly higher than the national average of one in three homes.

“What this report shows is that it is more important now than ever to increase awareness of the risks of asbestos exposure,” said Latrobe Valley Asbestos Taskforce Chair and Latrobe Health Advocate Jane Anderson.

“More than 4,000 people die each year from asbestos-related disease, and Australia is seeing a third wave of asbestos victims who are mostly DIY home renovators.

“Almost every home built before 1990 has asbestos somewhere, and the risk of asbestos exposure can be minimised by understanding where asbestos is commonly found in the home, and what to do if you need to remove asbestos,” said Ms Anderson.

The model developed in the report “Estimating the volume of residential asbestos in the Latrobe Valley – A model” calculates both the quantity of asbestos-containing materials and the most common applications in homes across Baw Baw Shire, Latrobe City, and Wellington Shire.

The table below shows the comparison in each municipality of asbestos-containing materials.

“We believe this is the first time a model for calculating the volume of legacy asbestos in residential properties has been developed in Australia. We expect and encourage other jurisdictions to use it to determine the corresponding health risks to the wider community.”

“The findings in this report have informed the development of the Latrobe Valley Asbestos Taskforce Year One recommendations, which we have today presented to the Minister for Energy, Environment and Climate Change, Lily D’Ambrosio. There are four key recommendations, all of which are aimed at reducing the risk of asbestos exposure and saving lives,” said Ms Anderson.

“In Asbestos Awareness Week, we remember the many lives lost to this dangerous substance, and urge people to be mindful of asbestos when doing any home improvement jobs. Asbestos can’t be identified by sight, it needs to be tested and the first step is to contact a licensed asbestos removalist. You can visit the asbestos.vic.gov.au website to find out more,” said Ms Anderson.

Quote attributed to The Hon Lily D’Ambrosio, Minister for Energy, Environment and Climate Change, and Minister for Solar Homes:

“I welcome this report and will review the recommendations. I’d like to thank the taskforce for their important work into this crucial issue for the Latrobe Valley.”

The increase being seen in queues in major hardware stores and corresponding home improvement activities means that a lot more people could unknowingly be putting themselves, their families and neighbours at risk.

“We strongly encourage anyone living in a home built before 1990 to think twice before doing any sanding, wall removal, tile replacement or flooring upgrades due to the very real risk of asbestos exposure,” said Chair of the Taskforce, Latrobe Health Advocate Jane Anderson.

“Asbestos containing products were very common and widely used in Australia right up until the late 1980’s, and are commonly found in bathrooms, kitchens, interior and exterior walls, under flooring as well as in heating flus and also fencing.

“What we know from a survey undertaken late last year is that many homes in the Latrobe Valley aren’t being checked for asbestos prior to renovation.

“Lung cancer, Mesothelioma and other asbestos related diseases can be avoided if people understand the dangers of asbestos exposure and can minimise the risks.

“While initially these diseases were seen in people who had worked in asbestos mines, then in those working with and/or manufacturing asbestos products, now Australia is seeing a third wave of victims which are mostly home renovators.

“I urge those who may be thinking of doing some home improvements – no matter how small – to visit the asbestos website at www.asbestos.vic.gov.au for information about where asbestos can be found in the home and how to minimise the risk of exposure,” said Ms Anderson.

One in three homes built in Australia before 1990 contain asbestos, and the recent survey undertaken by the taskforce shows that these homes aren’t always being checked for asbestos prior to renovation.

“What’s concerning is the risk of asbestos exposure that many DIY home renovators may be opening themselves, their family, and their neighbours up to,” said Chair of the Taskforce, Latrobe Health Advocate Jane Anderson.

“In many cases it is impossible to tell the difference between a product that contains asbestos and one that does not. Licensed professionals will determine if asbestos is present or not only through laboratory testing.

“We want to ensure the health and safety of everyone is considered when doing home renovations – DIY renovators and their families and neighbours, apprentices, tradespeople, and anyone who may go onto a property being renovated.

“There is available advice and information for DIY home renovators about identifying, removing and disposing of asbestos on the asbestos website, which is the best place to start,” said Ms Anderson.

It’s National Asbestos Awareness Week, and a reminder to everyone not to be complacent about the dangers of harmful asbestos fibres.

With the theme of “Asbestos lurks in more places than you’d think”, the Latrobe Valley Asbestos Taskforce is joining hundreds of government and non-government organisations, in encouraging Australians to be aware of where asbestos might be found.

It’s a fact of life that living in Australian means living with asbestos – Australia was one of the highest worldwide users of asbestos through history, and despite a nationwide ban coming into effect in 2004, large amounts of asbestos are still present in many Australian homes, workplaces and the environment.

Inhalation of asbestos fibres can cause a range of deadly diseases including mesothelioma, a rare and aggressive cancer. There is no cure and prognosis is extremely poor. The Latrobe Valley has a higher rate of mesothelioma amongst males than any other regional or rural area in the state.

It is estimated that 4,000 Australians are dying from asbestos-related diseases every year. This is twice the annual road toll.

Do-It-Yourself (DIY) home renovators have been identified as a group at risk of exposure to asbestos in the home environment, along with tradespeople working in homes.

Homeowners and renovators need to be vigilant about the risks of asbestos exposure, particularly in older homes – and in places they might not think about. In many cases it is impossible to tell the difference between a product that contains asbestos and one that does not.

DIY home renovators are encouraged to always seek help and advice in identifying, removing and disposing of asbestos.

The Latrobe Valley Asbestos Taskforce is raising awareness and also conducting a survey about asbestos in the Latrobe Valley: https://engage.vic.gov.au/latrobe-valley-asbestos-benchmark-survey

The Latrobe Valley Asbestos Taskforce was commissioned in early 2019 and brings together government agencies, councils, local groups and unions to review how asbestos is managed in the Latrobe Valley.

The taskforce will assess current waste handling processes and safety practices, develop a plan for the management, demolition, transportation and disposal of asbestos material for all Latrobe Valley sites and locations, including domestic and commercial.

“One of the things we know is that the dangers of asbestos are not fully understood, and so we will be developing an awareness campaign to address that,” said Ms Anderson.

“Australia is now seeing what is referred to as a third wave of asbestos victims. The first wave of victims included people involved in the mining and transportation of asbestos, and the second wave included people who worked with asbestos products. The third wave includes people who haven’t been exposed to asbestos in the workplace but are developing asbestos related diseases. They are mostly home renovators.

“We hope that as many people as possible can set aside a little bit of time to complete the survey, so that the taskforce can develop a campaign that will be the most effective in reaching the wider community in the most effective way possible.

“This survey is an important first step in understanding community concerns, awareness of, and attitudes towards asbestos in the Latrobe Valley,” said Ms Anderson, “we need to get the message out that there is no safe level of asbestos exposure.”