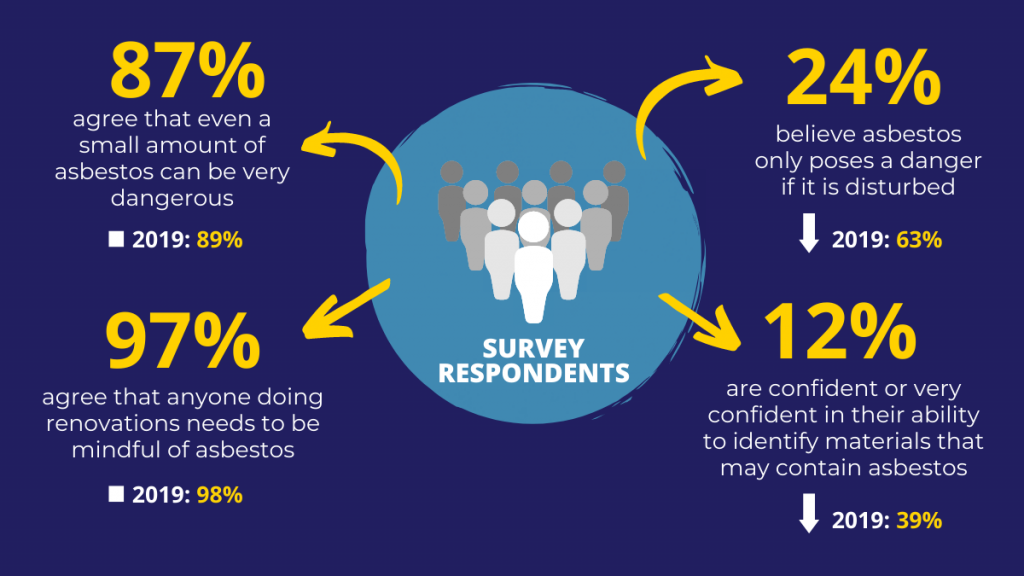 Measuring change in awareness and attitudes towards asbestos

Due to the historical use of asbestos in Latrobe Valley’s power stations and railway industries, many families have been affected by asbestos, and the area is well known for its high rate of asbestos-related disease. However, the use of asbestos-containing materials in the built environment up until 1990 goes far beyond the Latrobe Valley, and today it is believed that one in three Australian homes contain asbestos.

As detailed in a 2020 study published by the Taskforce,[1] it was common for planning schemes in the mid-20th century to mandate the use of asbestos cladding for the rebuilding of properties following bushfires. Due to its widespread popularity as a building product, Australian homes built or renovated between 1940 and 1990 are very likely to contain asbestos.

All surveys from 2019 – 2022 have reported a very high level of awareness of the dangers of asbestos, and the belief that the community should be made aware of the risks of asbestos exposure. While in the recent past, it has been common for people to believe that asbestos products are fine if you leave them alone, there is now a greater understanding that asbestos-containing materials are coming to the end of their product life, and are naturally degrading and releasing asbestos fibres. In 2019, 63% believed asbestos only posed a danger if disturbed. In 2022, this has gone down to 24%.

Another positive result in the 2022 survey has been the continuing decline in the number of people who say they are confident or very confident in their own ability to identify asbestos-containing materials. This has fallen from 39% in 2019 to 22% in 2022. This indicates that as more people become aware of the volume of different types of asbestos products, their confidence level in being able to identify asbestos-containing materials has declined.

Home renovation or improvement activities continue to be popular, and in 2022, 55% of respondents have been involved in renovations on properties built before 1990, and 74% state they would do at least part of the work in a kitchen or bathroom renovation themselves. While in 2019, 56% of DIY home renovators believed they could identify and manage asbestos on a job site, this has fallen to 30% in 2022. This still remains a concern however, as only 14% of DIY home renovators have had formal asbestos training.

With regards to home renovation works recently completed, the number of home renovators assessing for the presence of asbestos themselves has decreased but is still very high at 20%, down from 36% in 2019.

A success for the Taskforce has been the Breathtaking Renovations [2] video,  which has been part of a social media campaign and also broadcast on television in Gippsland. Half (49%) of this year’s survey respondents had seen Breathtaking Renovations, with 58% saying they were now more likely or much more likely to stop and think about where asbestos could be in their home.

Awareness of the Latrobe Valley Asbestos Taskforce has now grown to 70%, which is a good result considering the participants in this survey who have never either lived or worked in the Latrobe Valley is the highest recorded at 21%; three times the number in the original 2019 benchmark survey.

Despite the clear progress made by the Taskforce, concern remains that almost one in three properties (31%) built before 1990 are still not being assessed for asbestos prior to renovation. This is significant as two thirds of respondents (62%) indicated they were planning to undertake home renovations in the future, and 90% of all home renovators surveyed did some of the renovation works themselves. The importance of a professional assessment to avoid potential asbestos exposure is therefore a key area in which to concentrate future awareness efforts.

[1] Estimating the volume of residential asbestos remaining in the Latrobe Valley – A Model, 2020. https://www.asbestostaskforce.net/publications/