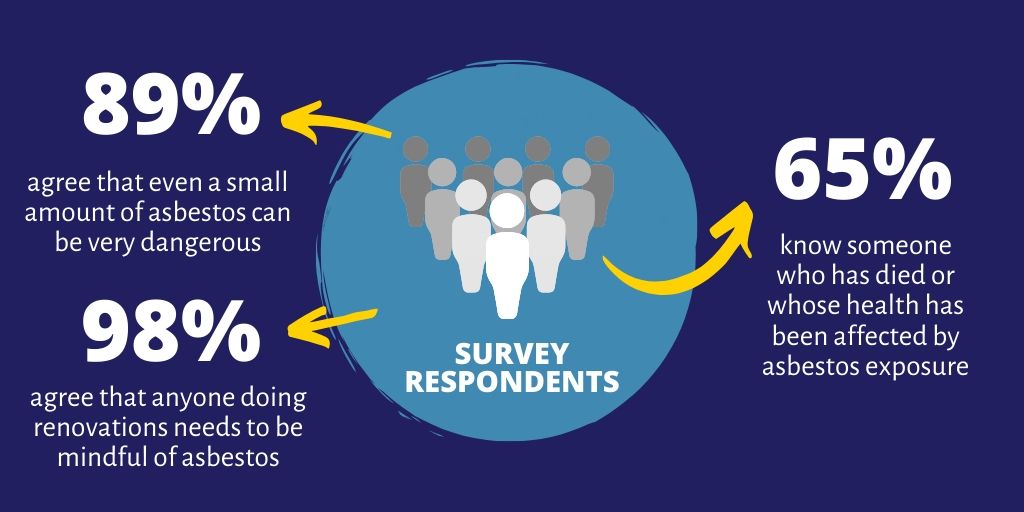 Thank you to everyone who participated in the survey, your time in providing valuable feedback is highly appreciated.

Of the survey respondents, nearly two in three (65%) have known someone who has died or whose health has been affected as a result of asbestos exposure.

Correspondingly, there is a high level of awareness of asbestos and asbestos related issues in the Latrobe Valley:

The two most highly rated concerns regarding asbestos are the health impacts and the illegal dumping of asbestos.

Many (39%) are confident in their own ability to identify asbestos containing materials but only 29% have had any formal training.

In the DIY home renovators section, two-thirds (67%) of the respondents report that they have undertaken home renovations in the past three years. Of concern is the 36% that undertook a risk of asbestos exposure assessment themselves, without engaging professionals.

While there is high level of agreement among DIY renovators that in principle, a licensed removalist ought to be engaged, almost 1 in 5 (19%) report having done the work themselves. Reasons for doing so include believing they had the skills/knowledge to remove asbestos properly (57%), and to save money (37%).

Two out of five (43%) DIY renovators surveyed intend to do renovations in the next 12 months comprising either internal or external works or both.

Overall, both sections of the survey reveal a demand for increased education, more accessible and low-cost disposal options, and greater levels of regulation and compliance.

If you would like to know more about asbestos in your home or workplace, please visit: