Australia had the highest apparent asbestos consumption per capita of anywhere in the world in the 20th century, estimated at 1.88 million tonnes.[1] Although a total ban on asbestos mining, manufacturing, imports/exports and the use of all asbestos products came into effect in Australia on 1 January 2004, much of it remains in the built environment, where asbestos was used as a key component in more than 3000 building products.[2]

Many asbestos-containing materials are now coming to the end of their service life, and it is important that all levels of government, community and industry understand the risks of asbestos exposure in our built environment. More than 4,000[3] people die each year in Australia from asbestos-related disease, which is almost four times higher than lives lost on Australia’s roads. A commitment to raise awareness, expand training, and increase resources to target enforcement would see many new potential exposures reduced and lives saved.

In 2020, the Latrobe Valley Asbestos Taskforce initiated a project to understand the volume of legacy asbestos remaining in the residential built environment.[4] A model was developed to provide region-specific results with the intent that the methodology could be replicated in other localities.

This new study is being undertaken to estimate the legacy asbestos volumes in the non-residential buildings frequented by the community every day; our workplaces, schools and hospitals, shops, hospitality venues, accommodation, and numerous community and business services. The municipalities included in the analysis are members of the Latrobe Valley Asbestos Taskforce: Baw Baw Shire, Latrobe City, and Wellington Shire.

As shown in Figure 1 below, the findings of this report reveal a total of 1.9 million square metres of legacy asbestos-containing materials in the non-residential sector across the three municipalities studied. This is approximately equivalent to the land area size of Melbourne’s central business district (CBD).[5] Almost 90% of legacy asbestos is asbestos cement sheet with the next highest amount being found in vinyl products such as sheets, tiles and adhesives (Figure 2, Figure 3). It is estimated that 43% of all non-residential properties have asbestos-containing materials (Figure 4). 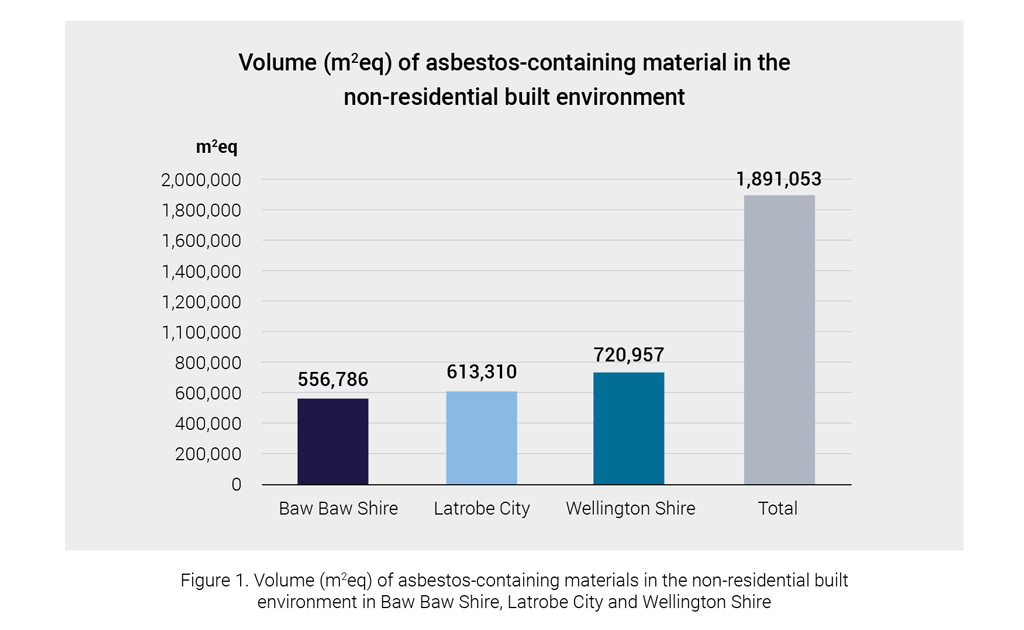 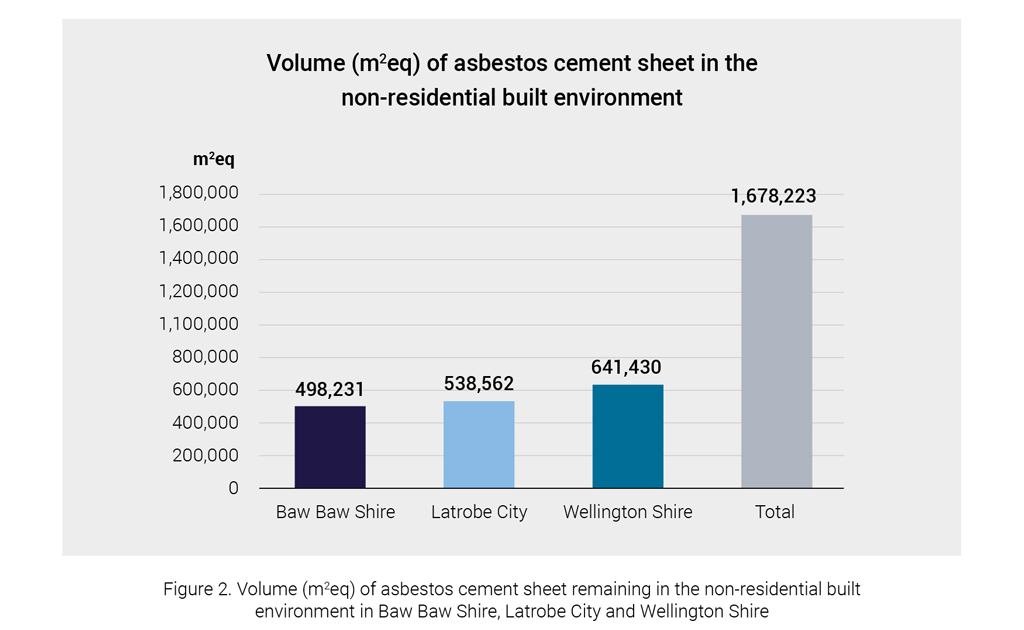 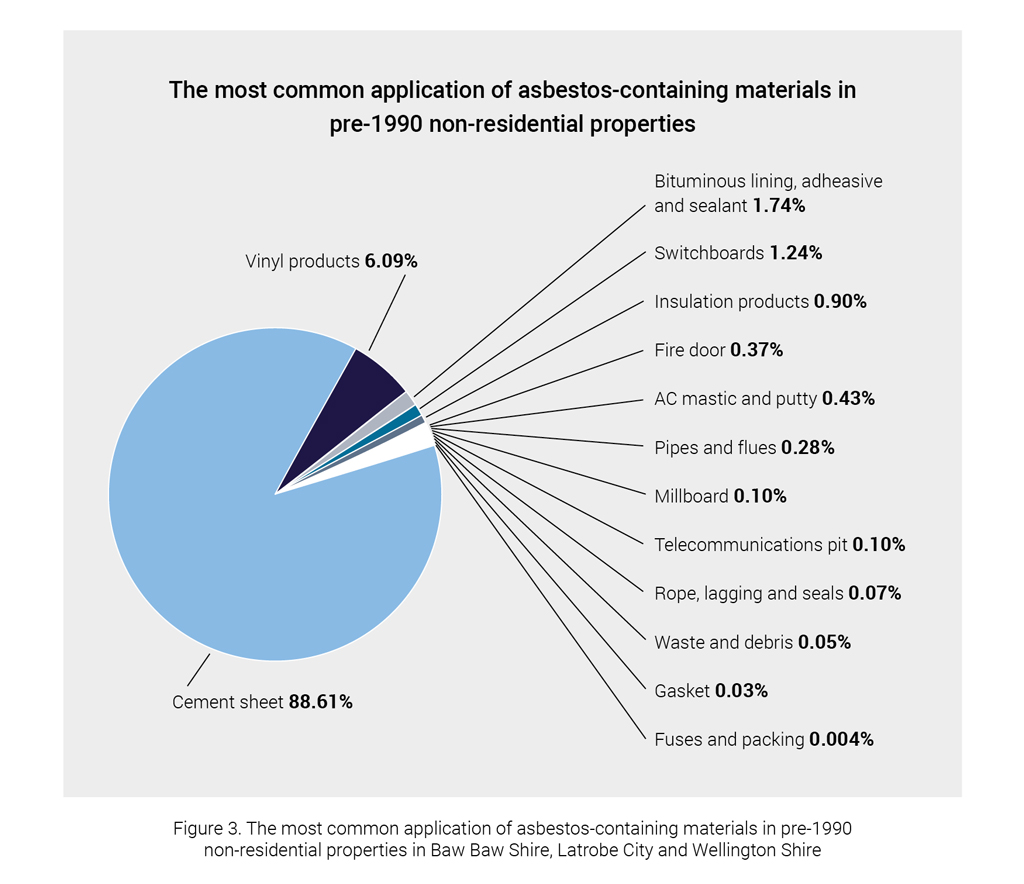 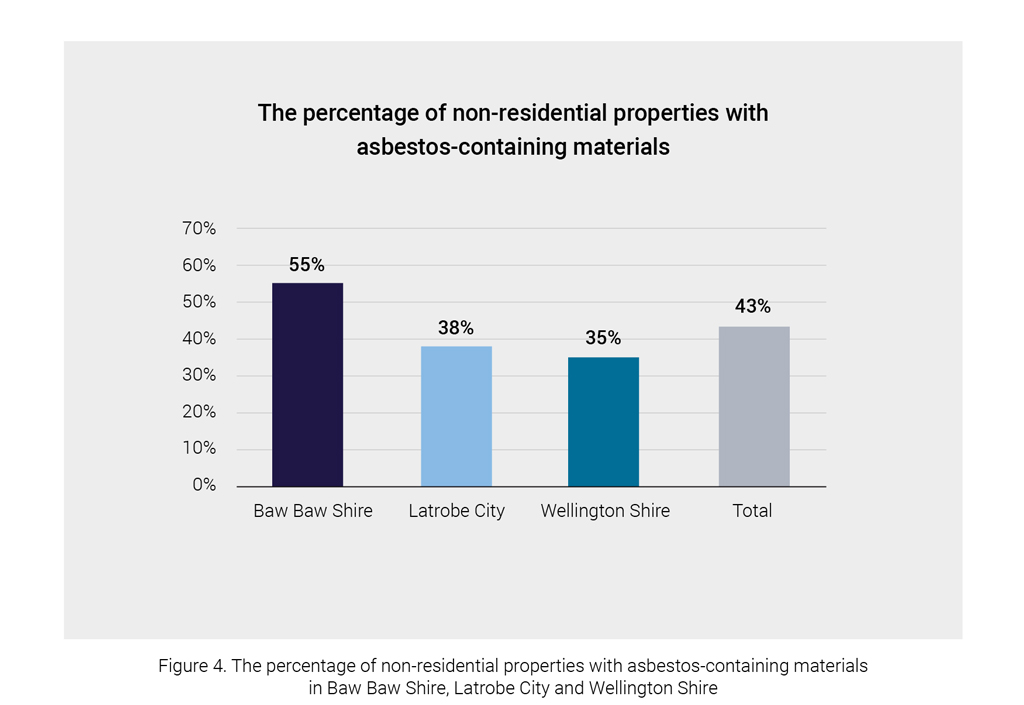 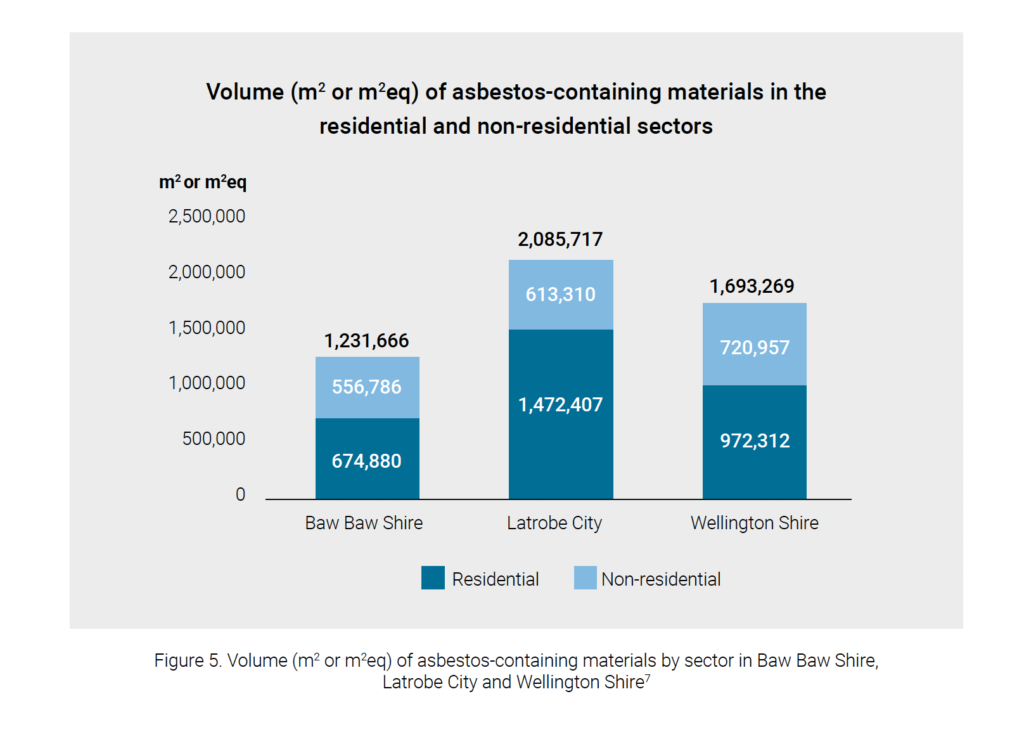 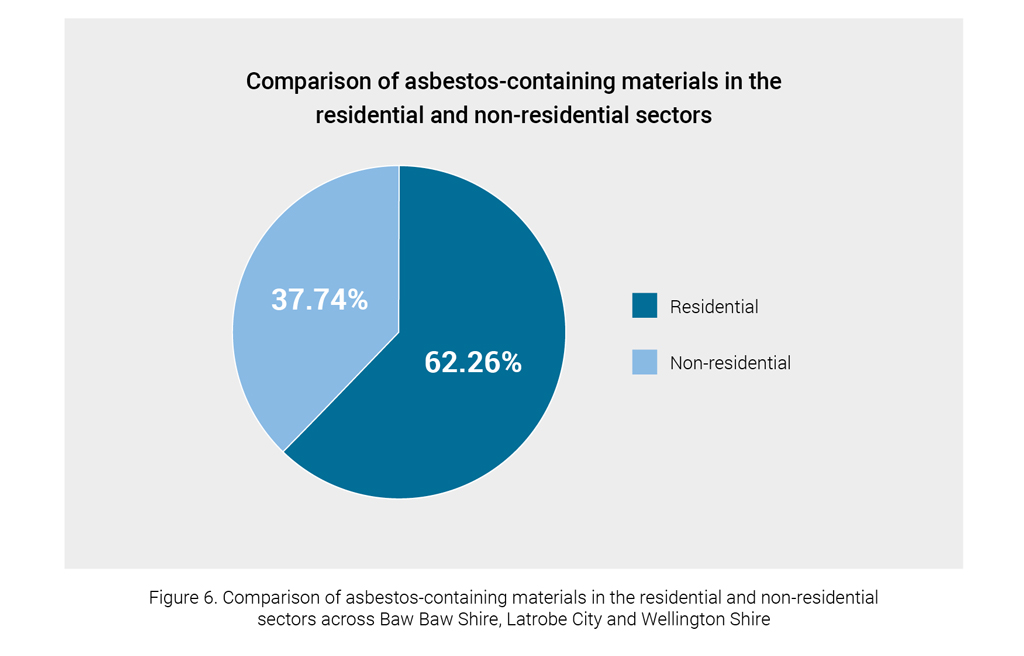 The above figures do not include heavy industry, as the purpose of this study was to shine a light on the legacy asbestos volumes in areas that have not previously been considered. If heavy industry such as the energy generation companies across the Latrobe Valley region had been included, the resulting data would have shown Latrobe City as having the highest volume of asbestos-containing materials. However this would have been outdated not long after report publication, due to the near-completion of asbestos removal and disposal works at the former Hazelwood Power Station.[6]

Significant effort has been focussed on minimising the risks of asbestos exposure in workplaces and operations in the industrial sector, and today this area is highly regulated. By comparison, this is not so in the residential space, where the responsibilities of asbestos management and health risk prevention are not clearly defined. It is critical that programs and initiatives are developed and implemented as soon as possible to reduce asbestos exposures both in our workplaces and in our homes. We can reduce the risk of harm, and prevent more people succumbing to asbestos-related disease.

[1] Preparing an estimate of the national pattern of exposure to asbestos in cases of malignant mesothelioma, Australian Safety and Compensation Council, Australia Government, 2008

[4] Estimating the volume of residential asbestos remaining in the Latrobe Valley – A model, 2020

[5] The boundaries of Melbourne’s CBD are not formally recognised however the map from the Australian Bureau of Statistics is based on what is known as the “Hoddle Street Grid” and is approx. 1.79 million m2 https://quickstats.censusdata.abs.gov.au/census_services/getproduct/census/2016/quickstat/206041122